The community garden was developed in 2012 to celebrate the 90th anniversary of The Nova Scotia Home for Colored Children (NSHCC).  The NSHCC had a farm along with the buildings in which the residents were housed and educated. The Home’s farming operation held a high priority during the early years.  The farm occupied approximately 20 acres of the Home’s land.  Agriculture played a two-fold role in the development of the Home: it allowed the institution a degree of self-sufficiency in food production, and the sale of surplus produce provided a source of income. 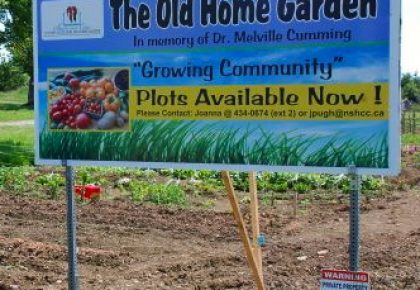 In 2012 marking the 90th year for the NSHCC, the heightened awareness and need for healthy eating, the Property Committee implemented the Old Home Community Garden.  The goals for the garden are to:

The Board of the NSHCC is pleased provide this community service and appreciates the support that has been provided.

[excerpts on the Old Farm taken from the Share and Care book by Charles R. Saunders – 1998]